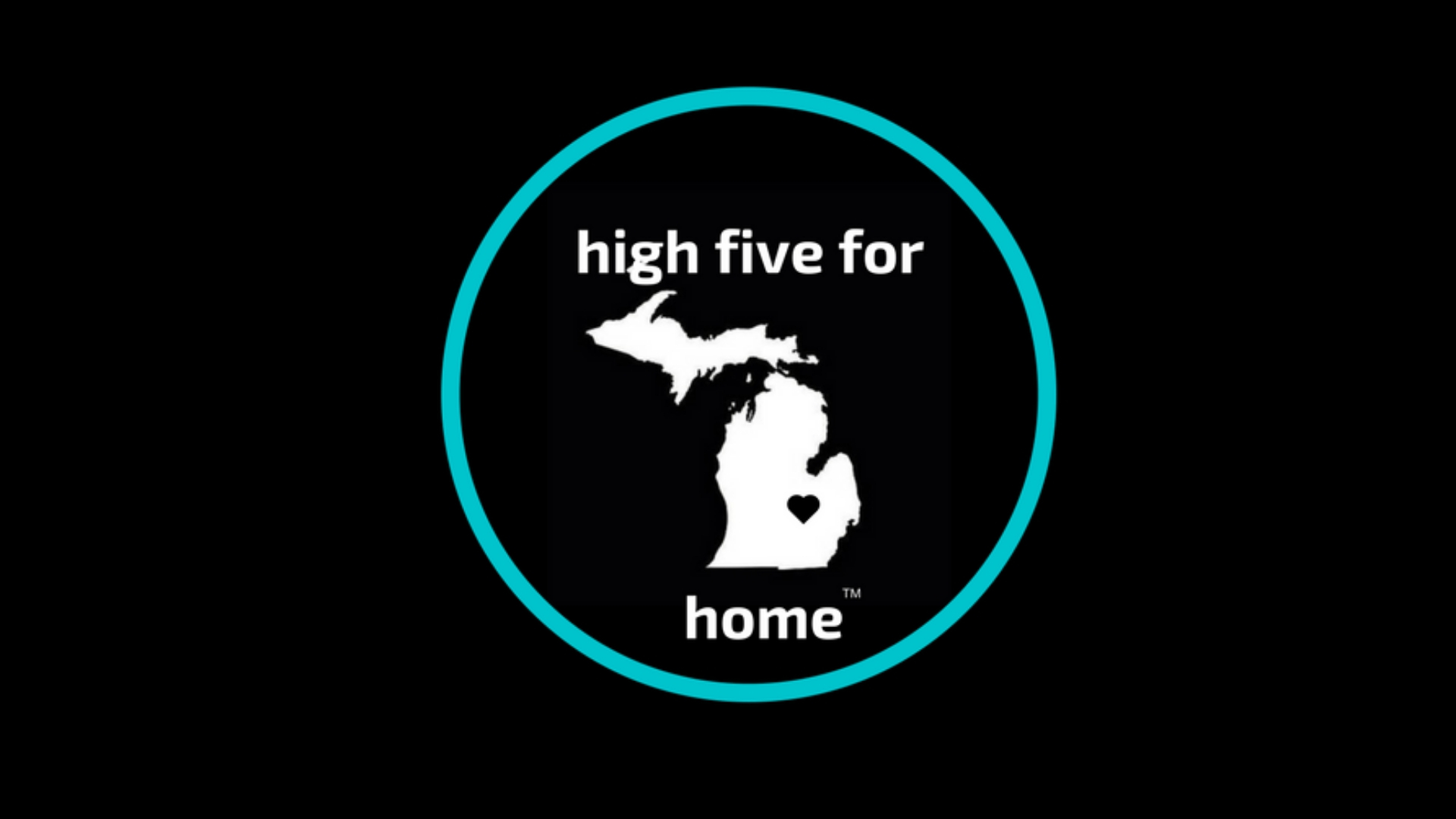 So you know how you swore you were not going to throw another birthday party for a long time because the birthday came right at the end of the school year and you are a teacher and that is just too hectic and requires much too much planning and preparation?  And then remember how you didn’t hold up to that vow?  Haha!  That is exactly what happened this year.

My Sweet V got invited to so many birthday parties as the kids in her preschool were turning the big 0-5.  She kept asking me about her birthday and what kind of party she would have.  I kept saying it would be a small family party.  Then I said she could invite some school friends.  But when I realized how fickle friendships are in preschool and the friends she wanted to invite kept changing, I decided, what the heck!  We will have a big party and invite all 25 of the kids because you know not every kiddo is coming.  We will have one last hoorah since 5 is a big deal.  You get to go to real school now!  We will have it at home and play pirate games outisde wiht lots of yummy food! So yay for a little party turning into a big one! And as far as I am concerned, life needs to be celebrated any way we can.  Can I get an amen?  A little louder now…..

She told me in February she wanted a pirate party.  I didn’t think that would hold much water since she was obsessed with the Jungle Book and Mowgli, but I did pin a few things anyway.

As we got closer, I asked again what kind of party she wanted.  In true sassy pants fashion, she declares, “Mom!!  I told you a long time ago I wanted a pirate party!”  Aaaargh….How could I forget?  So the pinning and planning and getting of the sister on board to do all sorts of things commenced.

Here is dessert table for The Best Pirate Party of the Year! 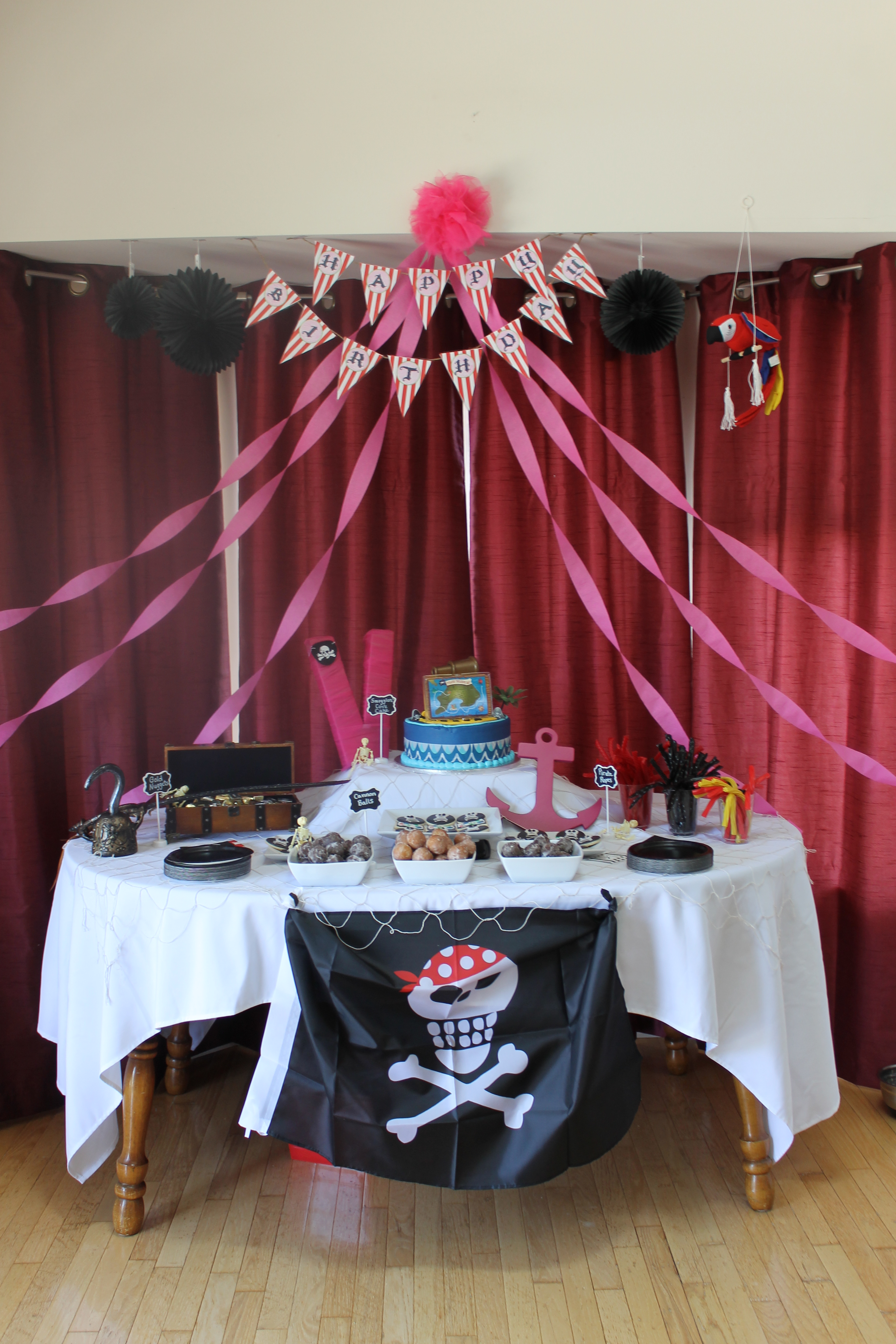 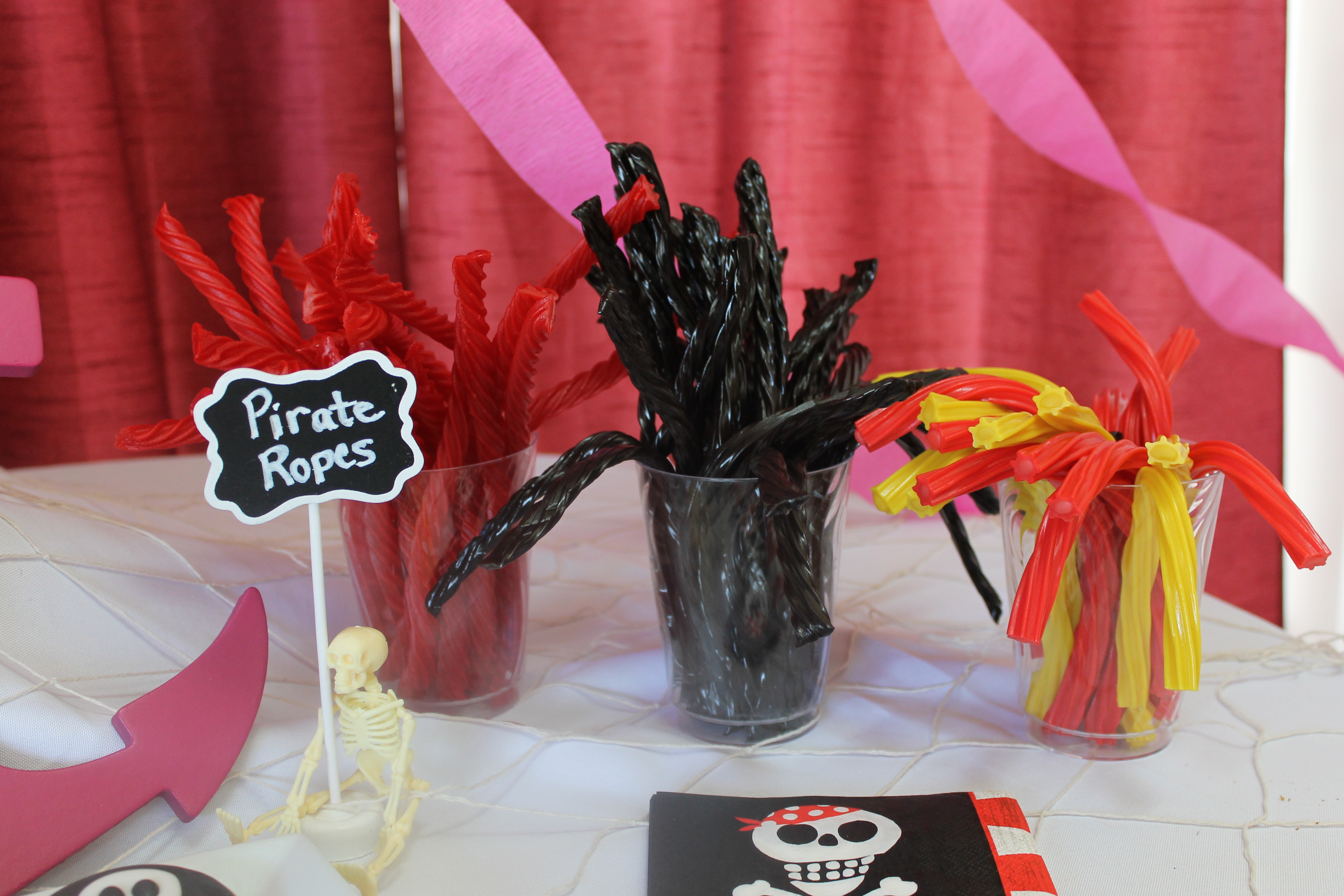 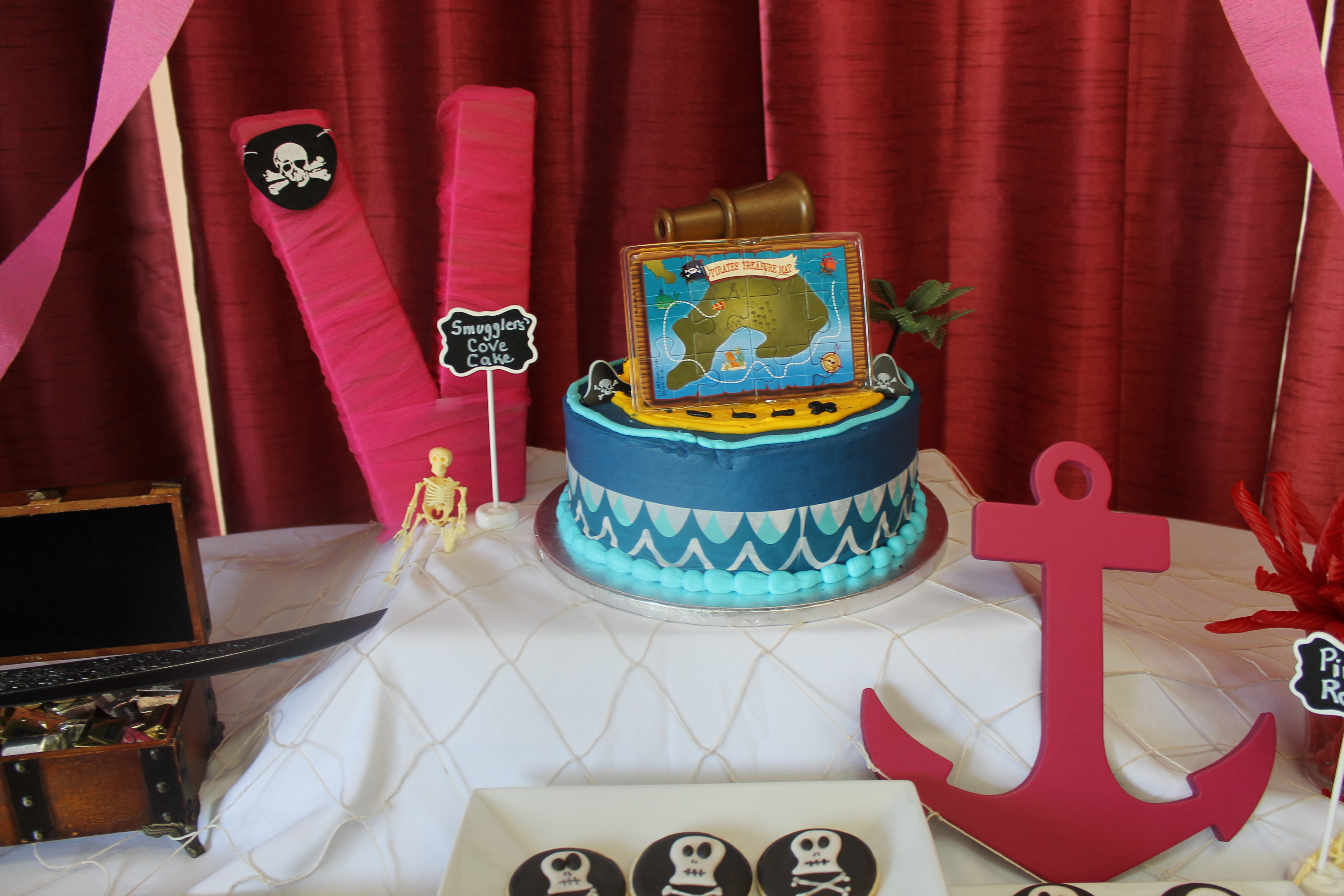 Two tier cake-$32 from Sam’s Club!! We accidentally stabbed it with the sword. 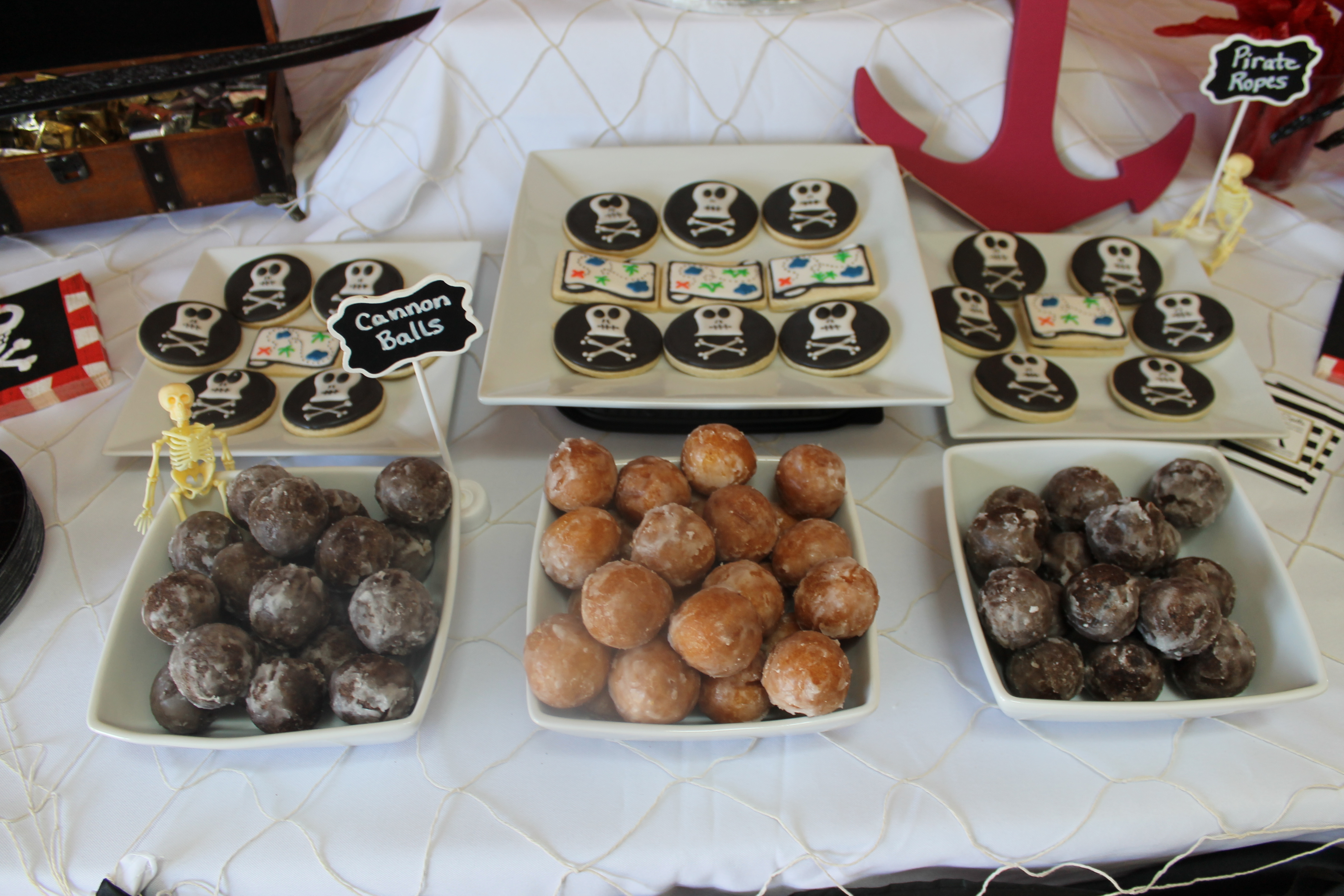 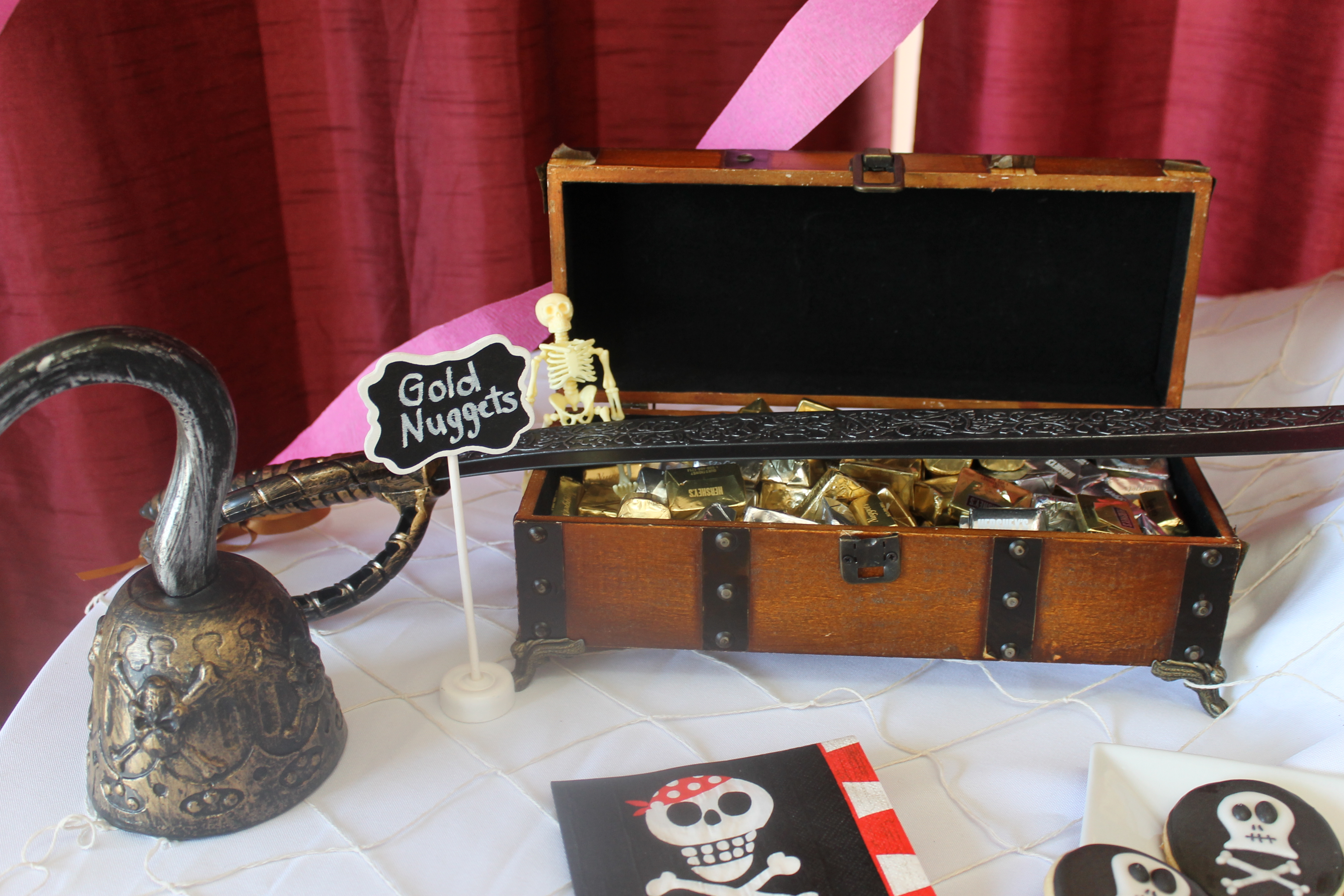 Okay, it really wasn’t that epic, but to a little girl who plays babies and sings Daniel Tiger songs all day long, this was pretty much equivalent to a two week all-inclusive vaca at an adults’ only resort in my world.  Two days before the party she declared that birthday parties at home are boring.  Ummm…what?????

I just spent three weeks whipping up a bash worthy of it’s own webpage and you say this ungrateful, repeated from some preschool friend who’s parents obviously have money to spend on lavish bashes in a place that we should really be at because cleaning up this mess is going to suck!  How rude!  And before you say my daughter is an ungrateful brat, remember, she turned 5 a mere week and days ago and she is just trying out new phrases and sayings (that obviously don’t fly in this house).  We talked extensively about the meanings of selfish, budgets, and gratefulness.  #weallneedalittlemoreJesus 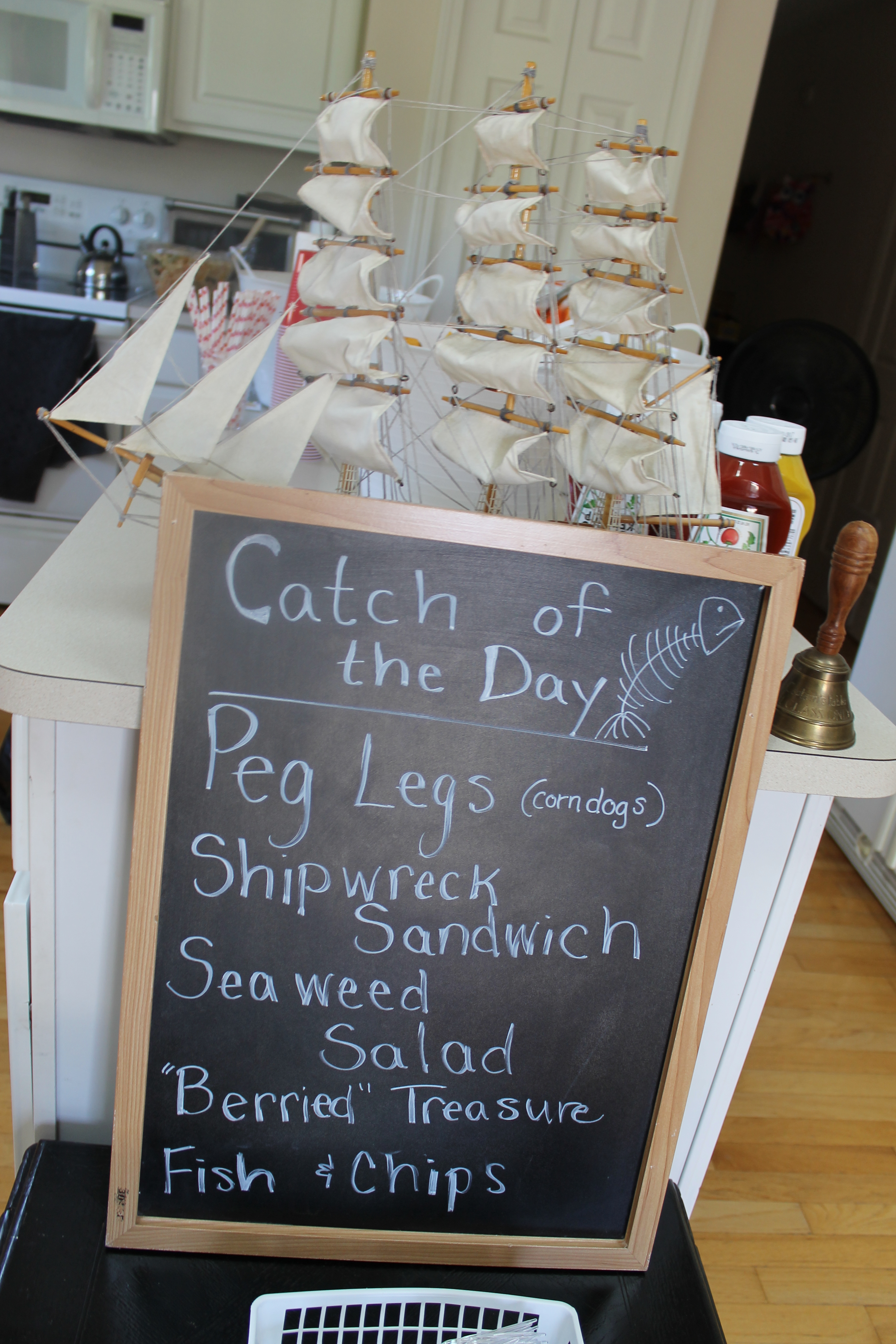 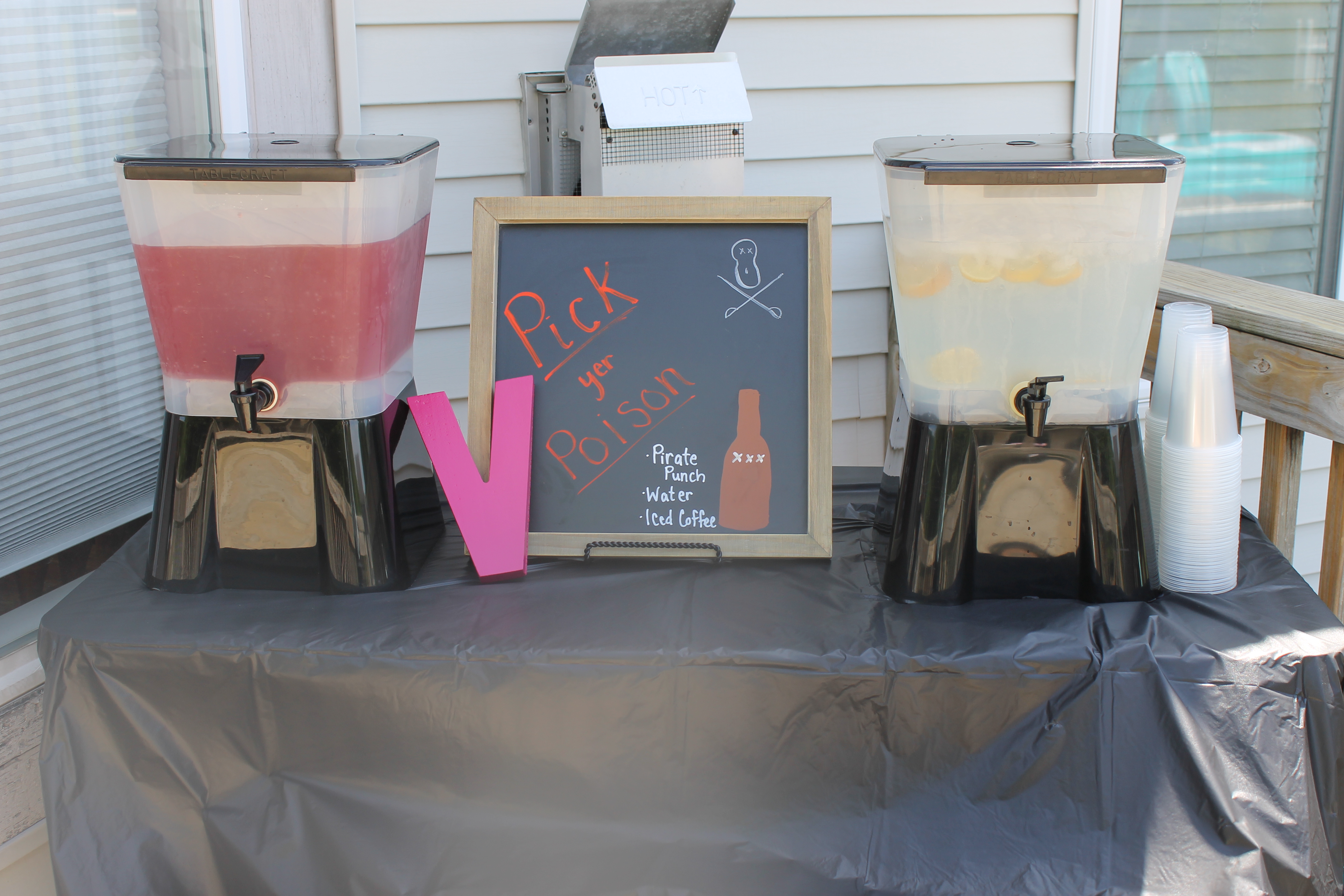 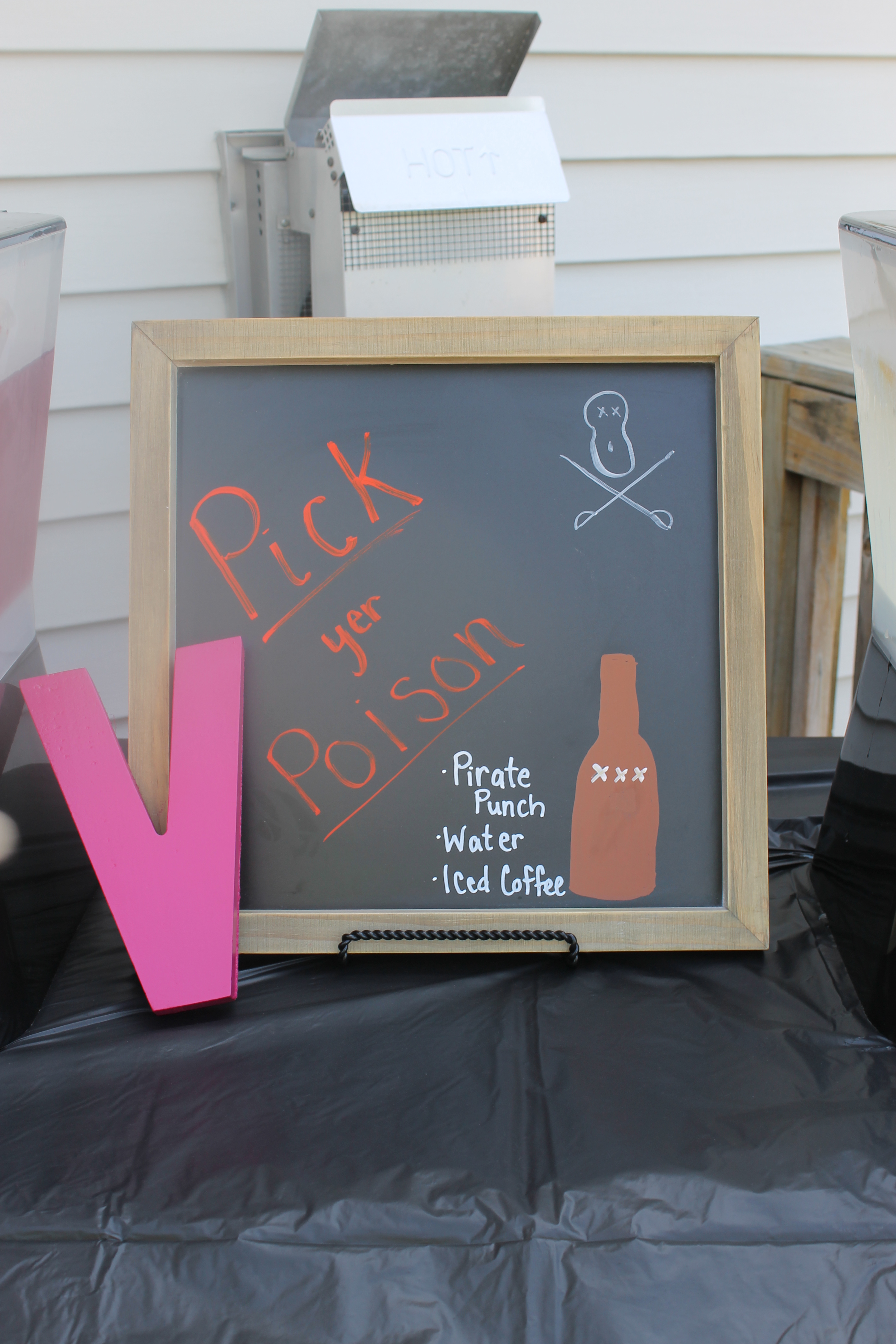 I digress…Thank you to my Sissy Poo, my mom and dad, the Hubs and the Bonus for helping to set this pirate birthday party up, make food, decorations, and corral kiddos. They had a blast.  We performed pirate tasks like acting out a pirate story, ring around the hook, tattoos, headbands, eye patches, and a water obstacle course across the plank and digging for treasure at the end.

I had a lovely cannon ball toss planned, but 5 year olds had other plans and just had a water balloon fight instead. 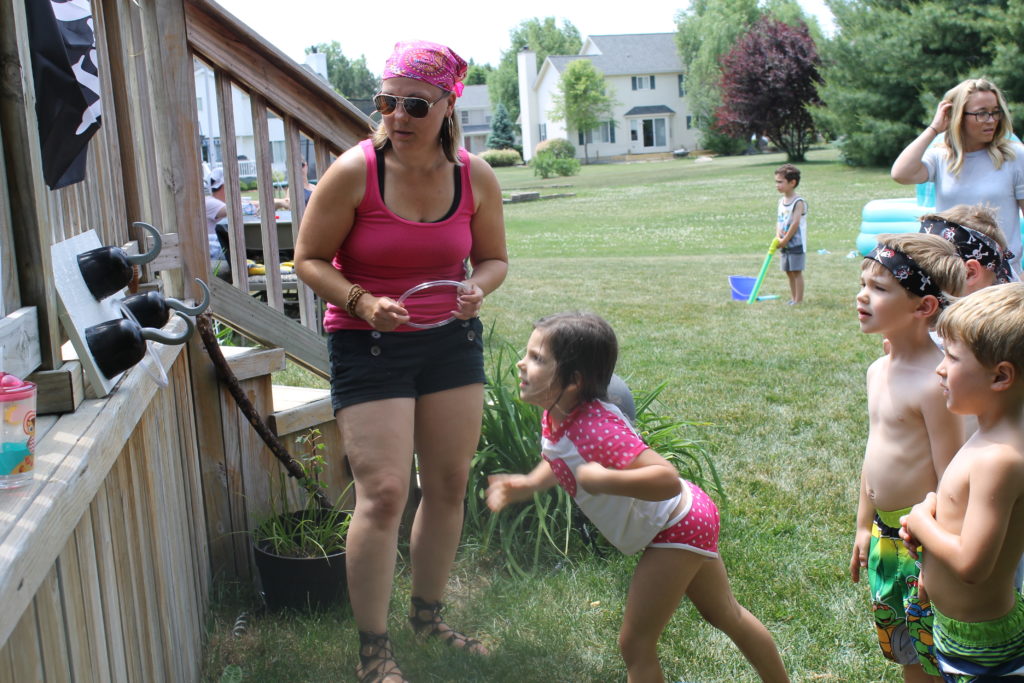 My Sweet V trying hard to ring the hook

Yes, I am still cleaning up the mess. But it was worth it to see this look on my Sweet V’s face and hear her say her at home party was the BEST party ever.  She is   still talking about it a week later and in a tiny one’s world of attention deficit, that means something. 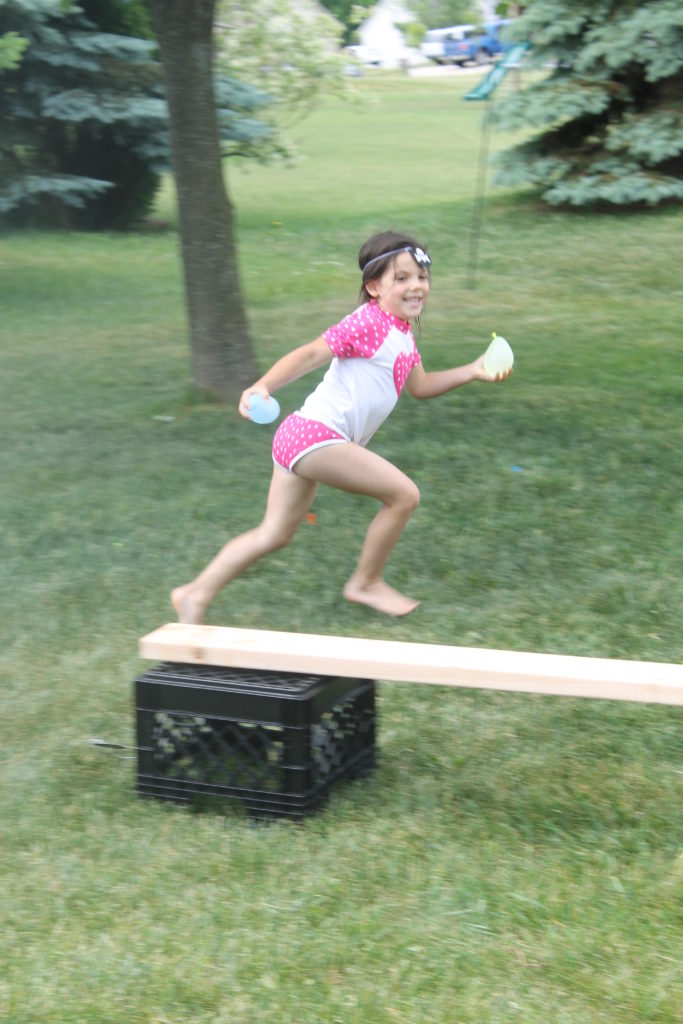 She’s got her cannons ready and running past the plank! 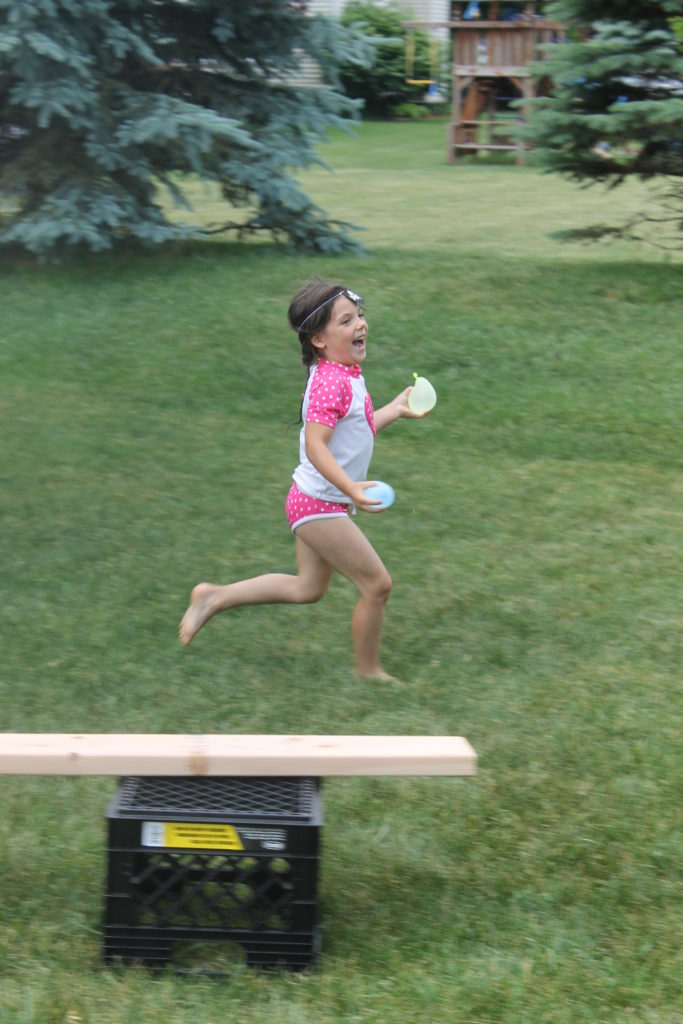 I love the look of pure joy! 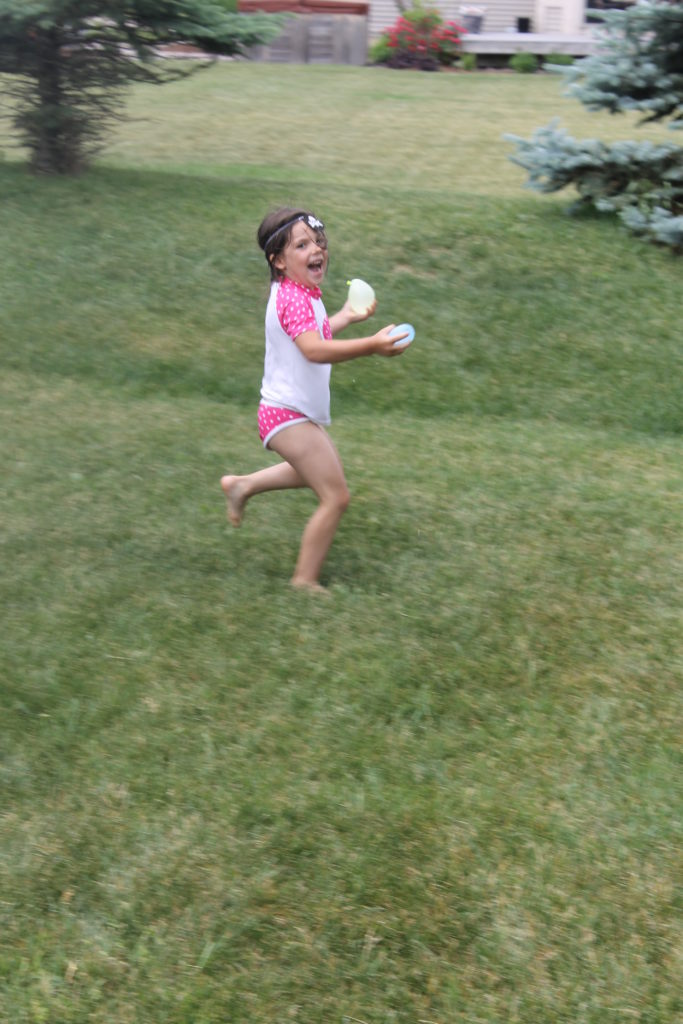 And she thought she needed to go to a bounce house instead of play at home!

The crazy Michigan weather threatened  of horrible rain storms up until the day before the party and they never came. Yay!!!  Because up until the day before I had no air conditioning in my house and no safe kid space for 30+ kids and parents.  Thanks be to baby Jesus in the manger because the air conditioning part we needed showed up in the mail on Friday and my amazing hubby repaired our air for $17.60 and no electrocution!! Pirate birthday parties rock!

Hooray for turning 5!  I am thinking that 6-9 is going to be pretty low key with dinner dates and the hot new movie.  We will celebrate big again at 10.   I am so thankful that I have my baby girl to celebrate.  Her life is precious. All life is precious and worth celebrating!

Life is good.  Michigan is GREAT! Throw a celebration and keep making your house a love filled home. 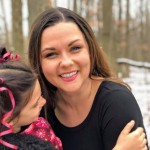 Kendra is a full time elementary teacher and mommy to a sweet and sassy 7 year old. She poured her heart and soul into her classroom and earning her graduate degree before becoming a mom and has spent motherhood trying to find a way to balance career and home and appreciate the journey while doing it. She’s a lake loving, ranch on pizza, pop can recycling, map on her hand Michigan girl! This momma never learned how to play euchre, but you can find her making a pretty long list, reading a book, or planning her next adventure in America’s high five! High five for home!

Find me on: Web 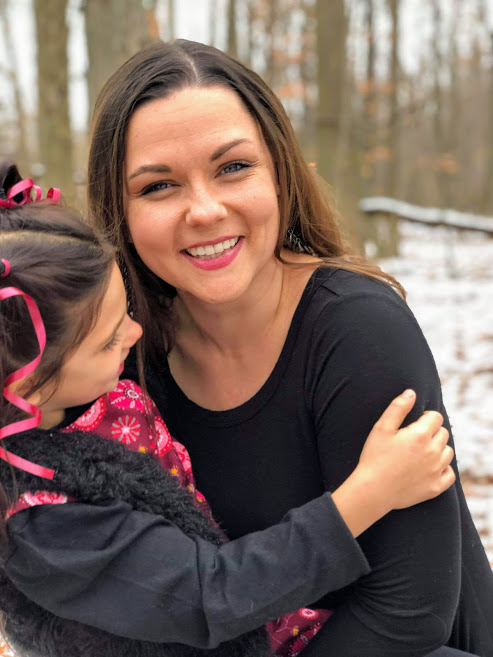